About a month ago I had an interesting idea for my Text Ascii Art Generator (TAAG) program. Though due to being busy with work and buying a house, I haven’t had time to try it out. However, the idea is applicable to almost any web service, so I thought I’d share it with you all in case someone out there was looking for a nifty way to make some extra money off of a web app or blog without posting a bunch of ads up. I’m aware that too much commercialism can kill a website, however, I think this idea is kind of clever. 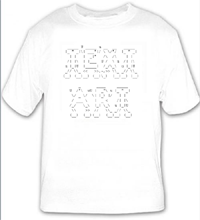 The idea originally struck me when I was brainstorming improvement ideas for TAAG. I thought that it might be cool if the user could put their output on a t-shirt. It’d make for a really neat way for someone to show their techiness/geekiness. After deciding I liked the idea, I then wondered if the t-shirt companies had already thought about 3rd party applications creating dynamic designs for them. After some quick googling, I discovered they had.

Both Zazzle and SpreadShirt allow you to dynamically submit designs for t-shirts which you can then sell. CNN even uses SpreadShirt to sell t-shirts of recent headlines. And you’re not limited to just t-shirts, you can put your designs on all sorts of crazy products – mugs, purses, hats, buttons, mouse pads, shoes, postage stamps, posters – the list goes on.

I’m not advocating turning your web apps or blogs into online stores, but if carefully used, this could compliment their output. An online photomosaic program that would let you buy a poster of your output might be kind of cool. And web comics that would let you buy t-shirts of your favorite comics would probably do pretty well, I had a whole bunch of Far Side t-shirts when I was in middle school.

Though as I said at the start of this post, I haven’t done any of this myself yet. I talked briefly to the FIGlet creators and they were cool with the idea, however, since I didn’t create the fonts themselves I’d feel wrong selling products with other people’s artwork on them without their permission / giving them a cut, and since there are over 300 fonts, this creates a rather complicated situation. So I may not even implement this idea (I’m still thinking about it though), but I figured I’d share the general concept, since it appears it could apply nicely in certain situations.