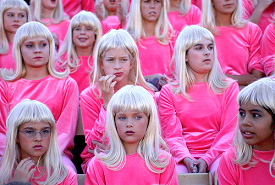 So my boss came into my office on Friday and off handily asked me if “Stacy” was more of a boy’s name, or more of a girl’s name. I immediately thought “piece of cake!” and brought up my Baby Naming Trends Tool, only to be really confused that there was no feature for determining this. “Wait, I remember programming this feature last Fall, where is it?” I thought. Then I remembered I had waited to push the update out until I finished a couple of other features (which remain unfinished). D’oh!

Since male vs female feature was kind of fun, I decided cut out the unfinished functionality (for now), and push out the update so users could query the data. Now you can see if names are more popular for girls or for guys. Just place a “m:” or “f:” before a name when you enter it in. Here are some examples of names commonly given to both boys and girls:

However, when creating this feature, I noticed some interesting abnormalities. No popular names seemed to be 100% male or female, even names that were obviously male or female. For example, according to the data, 11 females were named John in 2010, and during its peak popularity, when 80,000 males a year were being named John, the data says 200-300 females a year were being named John. Even though that means only ~0.375% of John’s were female, it still seems bizarre that someone would name a baby girl “John”. I wondered if this was a mistake on my part, but the underlying data showed the numbers to be correct.

The idea that someone would give a baby girl or boy a name of the opposite sex isn’t too far fetched, I know a few guys with names more commonly associated with girls, but are there really hundreds of guys named Jennifer walking around in the US? I accept that there may be a hand full, but my guess for the real reason this anomaly appears is because nurses or doctors sometimes make mistakes when recording the data. That makes me a little sad, but I suppose any data that’s hand recorded is going to have some errors. Though if this is the case, since this data comes from the US Social Security website, does this mean that these people may have their sex incorrectly recorded on their birth certificate? Though then again, perhaps people give a name for their baby, but then change it when it’s born and they find out it’s a different sex. Or then again, maybe there are lots of male Jennifers out there. Whatever the case, it makes for an interesting blip in the data.

I’ve rewritten the Keyboard Layout Analyzer. Back in November I told a guy I was close to being done and would have a new version up in “2 weeks”. I then told two other people in December who asked for additional features that I’d have it up in “2 weeks”. I now feel a little bit like a jack ass, but I honestly have been really busy. My new plan is to simply put up a preview version soon. The new app is mostly done, but rough around the edges in the output department.