One of the characteristics of web browser extensions that excites me is that you can write plug-ins for your favorite websites. For my next extension I wanted to create something that was a plug-in to a specific website or websites. After mulling over possible ideas, I decided to create an extension would augment the definitions from dictionary websites with relevant images. The result is Image Definitions for Dictionaries, which is a Chrome web browser extension that augments the results of Google Dictionary, Google Search, and Urban Dictionary with images from Flickr.

The idea for this extension came from an episode of the Simpsons where Homer is repeatedly defined in the dictionary, with his picture appearing next to certain words. I thought it would be interesting if that’s how all dictionaries worked. They would have an image next to the word they were defining and that image would be determined by what the web thought was most relevant. I thought this would especially be interesting for the more eccentric dictionaries like Urban Dictionary. Urban Dictionary does already have an image feature, but it’s based on user uploads and isn’t heavily used.

After playing around for a little bit, I had an extension that worked for the previously mentioned sites. Below you can see a slideshow which lets you see how the Flickr thumbnails are integrated into the dictionary webpages (clicking on a thumbnail within a dictionary site will take you to the image’s Flickr page):

Using the Flickr API turned out to be a breeze, though most of the functionality I needed was already provided in an example created by Google. I did briefly look into using other APIs, or having the option for multiple APIs to be used, however, I wasn’t able to find a service comparable to Flickr’s API. Google’s has Google AJAX Search API, but that appears to be aimed at providing searching services and it doesn’t seem to give you access to individual thumbnails. I looked into some other services too, but nothing jumped out at me.

Anyway, I hope this extension can be of use to some of you or provide you with some entertainment value. If anyone has any requests for sites I should support, or has any suggestions for the extension, please let me know.

I’ve made a small update to my Typing Speed Monitor Chrome web browser extension. You can now exclude statistics that come from certain domains. It was a feature requested in the comments section and I figured it would be useful for people who don’t want certain websites to effect their statistics.

I’m not sure how far I want to go with this app. I have a couple more feature ideas, and I would have added more with this update if I had not been busy working on another extension (see my next update). We’ll see though. If you have any feature requests just let me know.

After being somewhat frustrated with a web app I was having to repeatedly check, I decided to try my hand at writing a Chrome web browser extension. I basically just wanted to have a little notification pop-up when the web page told me a certain event was occurring, that way I wouldn’t have to keep checking it. After tinkering with one of Chrome’s sample extensions, my page checker/notifier was up and running perfectly. I had expected its development to be kind of painful, but it luckily wasn’t painful at all. 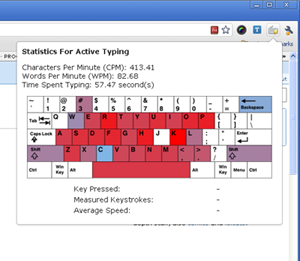 After its creation I decided to explore extensions a little more. I had a few ideas in mind and figured I’d implement one to see what I could do. I decided to first go with creating a “Typing Speed Monitor”, something that would capture what an average user’s typing speed was, tell them how much time they spent typing, give them statistics about what they typed, and give them a visualization to play around with. It was a pretty simple idea, but it involved messing around many of the areas of extension development and I think it came out well, so I think it was a good first project (not counting the project I created out of an example). If you’re interested, you can download it from the Chrome Extension Gallery here.

I’ve also uploaded the source to the extension to patorjk.com and you can check that out here. Since this is a pretty basic extension, nothing too complicated is going on, but I figured I’d post it up in case anyone was curious as to what was going on underneath the covers. I have a few more ideas for additional features, but I’ll first see if anyone actually uses the thing. Also, I’d be interested in making this app more internationalized, but I’m not completely certain on how the JavaScript keycodes work for foreign keyboards. If anyone has any information on this please let me know.

On a related note, later this year Google will unveil the Chrome Web Store, which actually sounds kind of promising. It’ll feature web applications, Chrome themes, and Chrome Extensions (the extensions will be moved from the gallery to the store). The store will feature free applications along with ones users can pay for. I really like the idea of a repository for web apps, and it seems like it’ll give developers a good outlet for their ideas. Anyway, it’s something to keep an eye on.