As of March 21st, it’s officially been two years since I decided to relaunch this website. On the opening day there wasn’t any hype and the site had been down for 2 months – and before that, I think I’d only updated twice in the previous two years. Plus, on this new day, all I had up was a message saying I’d be back. I couldn’t post up anything because my previous host had deleted all of my content and my hard drive had just recently crashed, taking with it everything I had saved. Other than being a lesson in routinely backing up files, this gave me a chance to start fresh.

This site, shortly before being deleted

It’s been two years and I think this site is currently as successful as its ever been. I don’t have a community like I used to, but I do have a decent amount of traffic and links coming in. The site, as a whole, currently gets around 2,700 visitors a day. So I feel good that I’ve been able to come back with something that people (hopefully) find useful and/or entertaining. I suppose it’s just a different site now than it used to be. I’m still steering the ship, and I’m still programming, but I’m using different tools and doing different things.

I think the thing I’ve enjoyed the most over the past two years is seeing the stuff I make or post up actually being used. When working in a big company, sometimes you program something up, hand it in, and then move onto your next assignment. You don’t really get to find out the experiences of the end user or what they thought of the program. You don’t know if they struggled to understand what you did or if they loved it. Well, sometimes you find out, but not always.

The cool thing about the web is that anyone can see the stuff you make. And to get feed back one can just google around or look at their referral logs and see where people are coming from. Sometimes this leads to some interesting info about how people are preciviing and using what you have up. Check out these Stumbleupon reviews I found of my 179 Ways to Annoy People chain letter page: 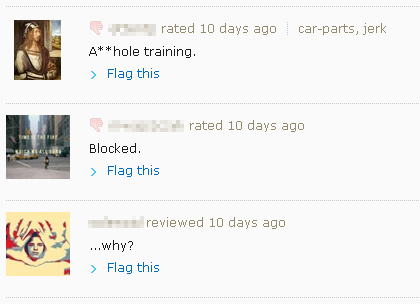 I think a certain number of visitors were thinking it was a real list. I thought it was obviously a joke, but you never really know what people are thinking when they come across your site, so I added in note at the top of the page letting people know it was just a joke list. Though I suppose some of the reviewers might have realized it was a joke and were just plain offended by it, however, calling a joke list “Asshole Training” seems a bit odd. [As a side note: I’m thinking of getting rid of this page entirely, since it doesn’t really go with the rest of the site, though maybe I just wont link to it and let its only source of traffic be 3rd party services like search engines and Stumbleupon]

Another interesting observation I was able to make, this time via my stats, was that a decent number of people were going to my Text Ascii Art Generator program and then just exiting via one of the out going links on the About page. This seemed like a rather strange behavior so I changed the program to automatically display the message “Type Something” once the page was loaded. This ended up causing a big increase in the usage of the program. My guess is that people were visiting the app’s main page and then getting confused as to what they were looking at, so they’d just skim the page and click on one of the out going links. It’s stuff like this, as a developer, that I’d never catch unless I had access to usage stats or user feed back.

Anyway, for those of you who’ve decided to follow this site for whatever reason, I thank you for checking in every so often. It definitely is nice to see stuff I make being used and to get feed back on it.

4 thoughts on “Two Years Since The Relaunch…”